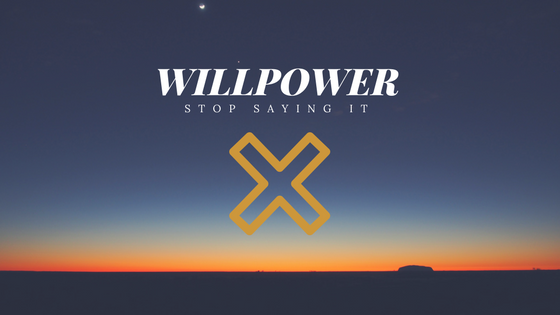 Willpower is a negative word. Now that it’s been said, let’s go through why you need to remove the word from your daily life.

Think about that time when you were with a friend or colleague, or family member at the store and you grabbed a donut, asked the other person if they were going to get one, and they said no. Did you ever say, “Well, you have more willpower than me.”?

Have you ever been on the other side of that same conversation with your friend saying that you had more willpower than they do?

What about after a long day and you have to focus on one last big task and someone mentions that you seem preoccupied, and you respond, “I just don’t have the willpower to get through this”.

How often do you hear the statement, “I HAVE THE WILLPOWER TO…“? My bet is not very often because we just don’t speak like that. We like sayings such as; Where there’s a will, there’s a way or, The will to succeed. But that’s not the word “Willpower” – therefore our brain doesn’t equate the term willpower with a positive outcome.

The first two examples are negative because they are a comparison between two people with different goals and the third is self-defeating.

How do we flip the script so you can have positive actionable results? Let’s break it down to the MCA Hive method (another example here)

I’m tired and don’t have the willpower to (finish this project, go to the gym, etc.)
Let’s start by breaking willpower into two positive words.

Do you have something to add? Share them in the comments below. Or shoot me an email. I’ll be sure to respond.

How To Use Failure To Help Your Career

Staying Healthy Into Your 80s

Community Events for the Week of Jan 31st

Playback: The Future of the Music Industry in the Creator Economy w/Kriss Thakar