Life: Why Crazy Must Become Your Normal! 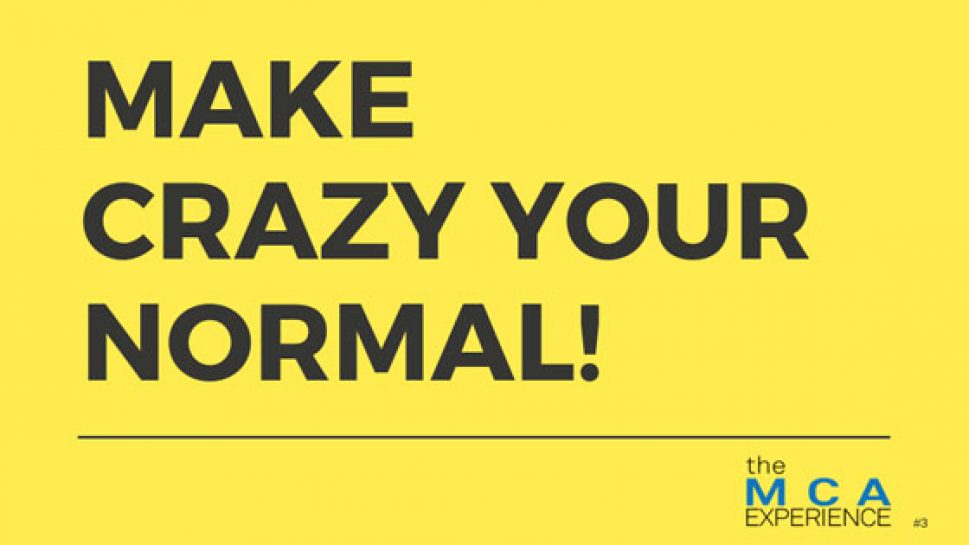 Let’s start off the new year by changing our mindset. No longer will you be able to say; If I only could…I want to, but I’m not ready…That’s too crazy, I can’t do that!

Nonsense! Right now, you need to change your thoughts and yell out the words of the amazing, Prince (R.I.P.), “Let’s Go Crazy!”

Did you yell it out? No. Let’s try that again…LET’S.GO.CRAZY!

Now, when I say crazy, I don’t mean acting like that crazy ex you had… I mean that you set a goal to do something that you want to do, yet your brain is holding you back. That’s right, the only thing holding you back is that fail safe mechanism inside your head that doesn’t want you to succeed. You see, the brain is wired to protect you, it likes comfort, stability, and will constantly tell you NO.

Ever since I was a teenager I always wanted to jump off a cliff into a giant pool of water. My travels never took me to such a location (nor did I seek one out), but finally, a few years ago I ended up in Sicily swimming on a beach and staring at a 30-foot rock ledge towering over the water. Finally! This is my opportunity – let’s do it! A couple friends said, “you’re crazy”, I said, “Nah, hold my beer”. After checking the depth of the water (crazy doesn’t mean not being safe), I trekked to the top. I stood on the ledge staring into the watery abyss below with the thoughts of Yeah, let’s do this. Except, when I was about to jump, my body froze, like can’t move my legs froze. My brain was saying, nope, not a good idea, we should probably reconsider this. Immediately, an argument broke out between Me and My Brain. Hey Brain, I just saw a 15 year-old kid do this – yeah but that’s someone else, you can’t do it – hey brain, shut up, I got this with or without you. In the end, I won and let it ride. After a few seconds I felt the rush of water over my body and popped back up in a sense of exhilaration – and to the cheers of other beach-goers. I yelled out, I’m doing it again, and ran back up to the ledge.

Not the actual cliff, but close enough.

That was fun…one more time. And guess what, as I stood there my body froze up again. What?!?!? Hey Brain, we just did this – I know but it’s still crazy – didn’t we have fun – yes, but you still don’t do things like this – well I do from now on. After a few more back-and-forths, I ignored the fail-safe mechanism again… and Splash!

Without any consideration I ran back up for my second encore. I stood there laughing, waving, joking, and dancing on the ledge. Lo-and-behold this time, my Brain didn’t have any arguments. I had succeeded in training my Brain that This.Is.My.New.Normal!

If you think you can’t do crazy, check out this video from one of my favorite YT channels, People are Awesome.

What you don’t see here is all the work that goes into making these feats happen. These people said, I WILL DO THAT and focused on doing what it took to defy every fail-safe mechanism. And don’t you go saying, I can’t do a handstand. Well yes you can. Maybe not the first time, but when you keep trying… you can. And when you feel the exuberance after you do it, you’ll want to keep doing more. You know what the best thing is about doing crazy (normal) things? It’s a shit-ton of fun. And when people say, “You’re crazy!” You can just say “Nah, it’s just what I do” and smile.

Do you have some stories about the normal you have done, or plan to do in the future? Let us hear about them in the comments below.

In the meantime, Hold my beer… I got some crazy to do.

5 Tips to Get Yourself Out of a Rut

You Should Compete Only With Yourself, Not Others

Life: Be Better Than Everyone Else: Make a Commitment

The Side Hustle: How To Manage Your Job and Business

Reasons to Remember Your Dental Health