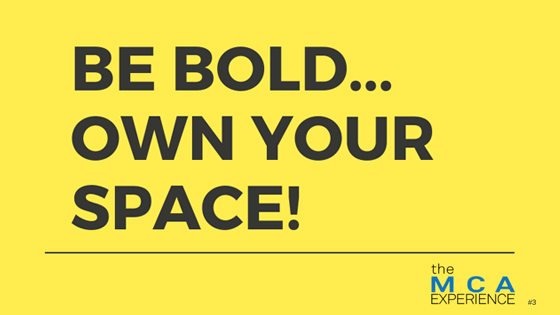 Person 2: (In a calm manner) “I feel I am correct and respectfully disagree with you.”

Which do you feel is bold statement? Boldness is not about who can shout louder, and who can be more intimidating – it is quite the opposite. One definition of bold is: showing an ability to take risks; confident and courageous. It is typically the people who are insecure and lack confidence, that are the ones yelling and bullying you with their point of view and stating you are wrong during a disagreement – they are the un-bold.

Boldness comes from having respect for yourself. It is the integrity in what you do, not second guessing yourself, seizing an opportunity, speaking your mind with confidence, and doing actions that are in line with your beliefs.

I Can Do That!

The first mindset change on your path to boldness is you have to be willing to lose. Just because you’re a bold person doesn’t mean everything always comes up roses. Let that sink in for a moment. I have to be willing to lose and be okay with that. Entrepreneurs and those who start businesses have to be bold. Quitting your secure day job and going it alone is a bold move. You can (and many do) lose everything. But the fear of that doesn’t stop them, it lights their fire.

I remember a story a buddy told me when he was 18 months into his company. He knew he had a great service (as everyone does), but his service actually was something people needed. In his story, he told of the time he went from NYC to DC to meet with his investors to secure additional funding. The company had $1,783 in the bank account, and no way of making payroll for his seven employees. If they didn’t get another round signed that day, they’re out of business – and his employees won’t get paid. After two hours of discussions, they came to an impasse. They wouldn’t give in. Now, the VCs also had skin in the game – so they want their initial investments back, but in the venture capital arena they are also bold and know they may lose money… and don’t typically throw bad money after good. After talks stalled, he finally stood up, packed up his notes, and said to his partner, “Let’s go – we’ll make something else happen.” One hour later he left with an additional investment of $1.2 million. Three years later Google bought his company.

If you’re interested in stories about making the big, and tough, decisions, I have to recommend Ben Horowitz’s book, The Hard Thing About Hard Things: Building a Business When There Are No Easy Answer This book changed changed my life and how I looked at my own career.

But Peter, I have no desire to run a business… I’m shy, I’m quiet, I don’t like to argue, I want people to like me, I don’t want to upset people. I just want to stop feeling like I’m being walked on, and want people to respect me… Well then, read on.

From Lamb to Lion

The story about my acquaintance is a bold story, and when I heard it, I thought wow, I could never be that bold, and honestly thought he was born that way. Boy, was I wrong. I asked him how did he get to that point where he could be like that. He then told me that he didn’t grow up like that. He was the quiet kid in school that was constantly picked on and overlooked when it came to picking teams. He said when he was around 22, he was quietly sitting in a meeting where his CEO was negotiating a large deal with another powerful CEO. During the conversation the other CEO said something in a bit of a threatening tone regarding the deal. His CEO didn’t flinch. He calmly, and directly replied that what was transpiring didn’t meet his needs, that he would not give in to being bullied, that the person’s tone was out-of-line with the conversation, and he would end the deal right there if the other person did not change his tone. After a short moment of silence, to my friend’s surprise, the other CEO apologized and said, “You know Steve, I always appreciate that you speak your mind and do it with respect, and that you put me in check, let’s carry on with this and make it happen. Right there is two great instances of people being bold. One, speaking your mind and not allowing yourself to be bullied, and the other instance from the person who apologized.

That day, my buddy looked at where he can start in the most basic areas of his life so he can become more bold. He made a commitment to have more respect for himself, which in turn made more people respect him. It started with a simple conversation with his friend whom he would let pick on him about a sensitive topic. He calmly expressed to his friend it made him uncomfortable and asked him to stop. His friend (who had no idea it was a sore issue) apologized and never mentioned it again – also his friend stopped much of his teasing of him and began to have more mature and interesting conversations. It then turned into him pulling a co-worker aside and asked him to not constantly interrupt him during meetings. Boom, no more unnecessary interruptions! He also chose not to argue through emotions, he would stay calm, but direct. He decided he wanted to be a leader and needed to do something different. In every day of his life, he practiced being bold in small situations and stuck to his integrity and beliefs – and spoke up when he felt it necessary. He said it starts with the small things, and then becomes second nature.

Grab a piece of paper and write this down:

I will become more bold in <name the area> of my life.

Do you see somewhere that you need to be bolder in your life or did you do something bold that the results surprised you? Share them in the comments below.

Do something BOLD today, and I’ll see you next week.

You Should Compete Only With Yourself, Not Others

Chance The Rapper Getting Sued | Spotify To Police Music Plagiarism